The management of AQUACHIM with care for future generations.

The official award ceremony for the National Contest organized by the Union of Chemists in Bulgaria took place on 14.03.2017 at the premises of the organization. Recent Bachelor as well as Master graduates in chemistry and chemical engineering from different universities in the country participated in the competition.

The Commission was composed of Prof. V. Beshkov (Chairman) and members Prof. Dimitar Tsalev, Assoc. Prof. Ivo Valchev, Assoc. Prof. Chavdar Bonev, Assoc. Prof. Vasil Neychev and Assoc. Prof. Katja Arishtirova and issued the “AQUACHIM” award for 2016 unanimously to Diana Cholakova from the Faculty of Chemistry and Pharmacy at Sofia University "St. Kliment Ohridski". The awarded diploma thesis is entitled "Control over the form of droplets that undergo a transition phase". Supervisor of the awarded thesis is Prof. N. Denkov. The "AQUACHIM” award includes a certificate and cash prize of 2,000 BGN. 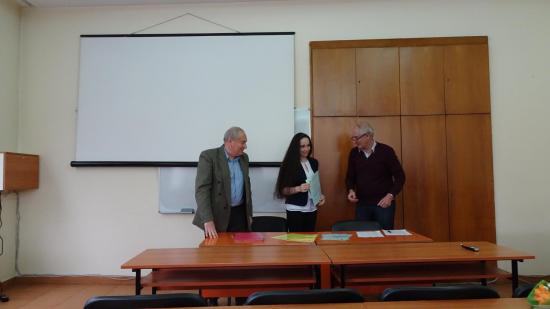